Hoshizora e Kakaru Hashi, sometimes shortened to Hoshikaka and also known by the translation A Bridge to the Starry Skies, is an erotic visual novel developed and published by Feng, released on October 15, 2010 for Windows. The story, a mostly comedic slice-of-life, centers on Kazuma Hoshino, an adolescent boy who moves into rural Japan with his brother, and the personal and romantic encounters he has with a handful of the female residents there. Though the game requires little interaction from users, Hoshikaka engages the player through a nonlinear plot that they are given opportunities to change the course of during play. Feng announced work on Hoshizora e Kakaru Hashi in May 2009 and marketed it through public venues and the broadcast of a radio drama throughout development. The game was postponed a total of nine times and released almost a year after its initial date but was met with relatively positive reception. On November 11, 2011 Feng announced work on a fan disc for the game, set to be released on February 24, 2012. Following the game’s release, Hoshizora e Kakaru Hashi made transitions into other media. Two light novels were published, as was an art book, audio dramas and several albums of music. A twelve-episode animated television series and direct-to-video single release was also produced by Dogakobo. 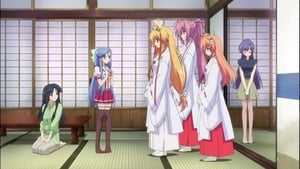