The War of the Gargantuas 1966

Gaira, a humanoid sea beast spawned from the discarded cells of Frankenstein’s monster, attacks the shores of Tokyo. While the Japanese military prepares to take action, Gaira’s Gargantua brother, Sanda, descends from the mountains to defend his kin. A battle between good and evil ensues, leaving brothers divided and a city in ruins. 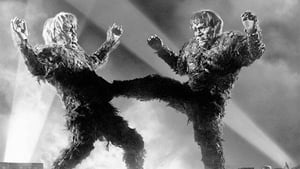